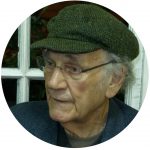 Every culture, past and present, carries a defining story deep in its psycho-historical roots that not only reflects the history of that culture and its roots, but also its evolutionary telos as well as a roadmap into its future.  A primary function of psychic evolution is to make liminal heretofore unconscious – and very often unimaginable – archetypal dynamics, concepts and images – that are to be made manifest in the imminent future of the collective in both people and their culture.

Jerome S. Bernstein will discuss the Garden of Eden story as the cosmological myth of Western civilization and its defining telos as being the birth and evolution of “self-reflective consciousness,” and along with it, the mandate of Dominion by our species over all life on this planet.  It is the latter which fundamentally threatens the survival of life as we know it and the literal extinction of our species.  He will also explore “Reciprocity” as an emergent compensatory psychic paradigm that is attempting to engage our rogue Dominion psyche.